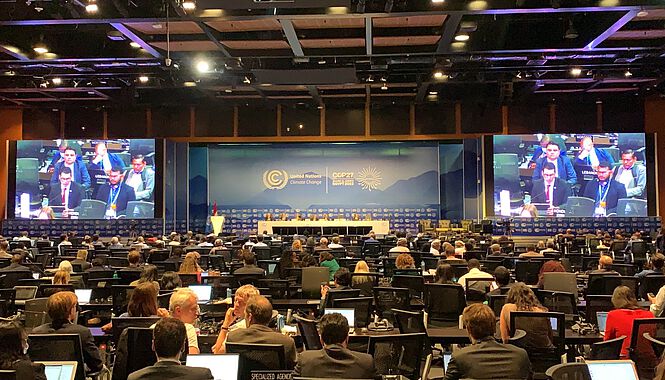 02 Jan COP 27: A victory for civil society, many failures of the states

2022 a team from Südwind was in Sharm el-Sheikh and closely followed the negotiations at the World Climate Summit as well as the numerous civil society initiatives.

The initial situation of the climate conference in Egypt (COP27) was already highly problematic. Repression and arrests of activists in the run-up to the conference, the remote location of the conference site, and 60,000 political prisoners provided a devastating picture of the human rights situation. Civil society participation at COP27 was to be made as difficult as possible. Nevertheless, the momentum of civil society was able to prevail on one crucial point at this world climate summit. Together with the countries of the Global South, the climate movement demanded one thing above all: A fund for the devastating losses and damages of the climate crisis. With marches, rallies and actions, the global movement for climate justice has carried this important demand into the negotiating rooms – and has thus achieved a milestone. At the same time, there were gross omissions on other negotiating points. Instead of courageous steps for stronger climate protection ambitions, in many cases the few minimal compromises of the last climate conferences had to be defended.

Südwind’s summary of the climate conference is thus divided:  On the one hand, the agreement on a new fund for loss and damage must be seen as historic progress. On the other hand, there were serious omissions in climate protection and adaptation.

Climate-related loss and damage already today means that rich countries are withdrawing young people and people in the Global South in particular of their opportunities for self-determination. The climate crisis is thus becoming an accelerant to existing crises, exacerbating inequalities and depriving many people of essential livelihoods in the here and now. In 2022 alone, devastating floods have hit Pakistan and Nigeria, extreme droughts occurred in the Horn of Africa, and life-threatening heat waves occurred from places like UK to China.

That the world’s rich countries are finally agreeing to a fund for loss and damage must be seen as a victory for the Global South. Activists and representatives of poor and particularly vulnerable countries have been campaigning for this for over 30 years. At this year’s climate conference, the pressure was finally met and a fund was agreed for compensation payments from the rich countries to the poor. Agreement was also reached on a side issue on technical assistance to repair loss and damage.

Although several steps are still needed before money actually flows through this fund, at least the time of unaccountability is over. In keeping with the motto of the UN’s Sustainable Development Goals (SDGs) – “Leave no one behind” – the aim is to leave no one behind, also in the case of loss and damage. The fund is essential not only to restore damaged trust between nations, but also to enable poor countries to make sustainable investments in climate action in the first place. A study of the 55 countries most affected by the climate crisis found that they have suffered around $525 billion in climate damages over the past 20 years.

“People are not just vulnerable and poor. People have been made poor and vulnerable by colonialism and extractivism.”- Zukiswa White, activist with the African Feminist Taskforce.

The scale of loss and damage in the Global South is also because the legacy of colonialism and economic dependence has left countries with few technological and financial resources. As important as the decision for the Compensation Fund is, money alone will not make up for the losses and damages experienced and will not automatically return stolen resources and capacities. The road to true climate justice is thus still very long. This was also shown by the far-reaching failures of the climate conference.

The COP27 negotiations failed to tighten up climate protection plans and adaptation measures. Current measures are far from sufficient to contain global warming to below 1.5 degrees Celsius. On the contrary, under current plans, we are heading for catastrophic warming of 2.7 degrees Celsius. And already today we are recording global warming of 1.2 degrees compared to pre-industrial times.

Yet there was no real progress on emissions reductions at the climate conference in Egypt. Only about two dozen countries have, as agreed, submitted upgraded National Climate Change Plans (NDCs) since the last climate conference in Glasgow. In the final text, there is no mention of phasing out fossil fuels (only, as mentioned in Glasgow, “phase-down of coal”), nor is there any mention of ending investment in fossil fuels.

Thus, we continue to race unchecked towards the 1.5 degree limit. The lack of courage and action on the part of international policymakers in the area of climate protection is grossly negligent and threatens to deprive millions of people of their livelihoods. If we allow the earth to heat up above 1.5 degrees Celsius, one in 10 people will be at risk of extreme heat waves.

At the same time, there are huge funding gaps, particularly in the area of adaptation measures: Neither did COP27 make any progress in paying out the gap to the promised annual $100 billion in support funds for climate mitigation and adaptation in countries of the Global South, nor is there an implementation plan for the promised doubling of support for adaptation measures. Little attention has been paid to the fact that the Gender Action Plan, the implementation plan for gender equity at international and national levels, has remained unfunded and thus lacks the resources for effective implementation.

The biggest unaddressed elephant in the room at the climate conference was once again the topic of climate-related migration and displacement. Although the number of people affected by climate-related displacement (both sudden- and slow-onset disasters) is rising sharply, countries have failed to put the issue on the agenda and take up the task of launching an international protection system for affected people.

Moreover there no suitable forum for addressing the causes of the climate crisis, since resource and energy consumption in many countries is still on the rise. The accompanying extraction projects for fossil fuels and other raw materials – including metals for renewable energy – are devastating entire swaths of land, ecosystems and territories of indigenous and local communities.

“We are here to create solutions for the climate, not to increase violence and extraction projects on our lands and territories” – Andrea Ixchíu, indigenous environmental activist from Guatemala, during a protest at the climate conference.

The time after COP27: what counts now

Polluter countries and polluter corporations must finally end their dependence on burning fossil fuels. If they don’t, they will condemn billions of people to climate hell and vast regions of the earth will become uninhabitable. Only a strong civil society and united climate justice movement can put enough pressure on states to avert climate catastrophe. That’s why it’s critical now for civil society to step up the pressure, and make it clear to governments that the time for minimal compromises is over. Big steps and much more courage are needed now.

The countries of the European Union in particular are urgently called upon to reduce their emissions much more drastically. All subsidies for fossil energies and the expansion of fossil infrastructure must be stopped. At the same time, the EU must support a fair switch to renewables. To this end, the promised funds for climate financing must be made available. In addition, the financial pot for loss and damage decided at COP27 must now be sufficiently endowed.

Austria must pass a climate protection law as soon as possible to ensure that the binding reduction targets of 48 percent by 2030 are implemented. Compliance with climate protection targets must not be optional, but needs to be legally binding. Climate protection must therefore be enshrined in the constitution as a fundamental right. Austria pays 5 billion euros per year in fossil subsidies, and this must finally come to an end. Public money for fossil corporations is not compatible with a climate-friendly policy.